We were looking for a something called pine tar soap the other day to treat my son’s poison oak when we stumbled into Rivendale Bikes, Books and Hatches in Walnut Creek. The shop keeper Vince commented on my camera. When I mentioned that I mainly take moss plant photos he directed me outside to this patch of moss plants. I went outside expecting to be disappointed! On the contrary, there was a gigantic and robust patch of moss. If you go visit it for yourself, be sure to check out the steel framed bikes, meaningful books and the hand forged hatches inside! This shop rules quirkiness! 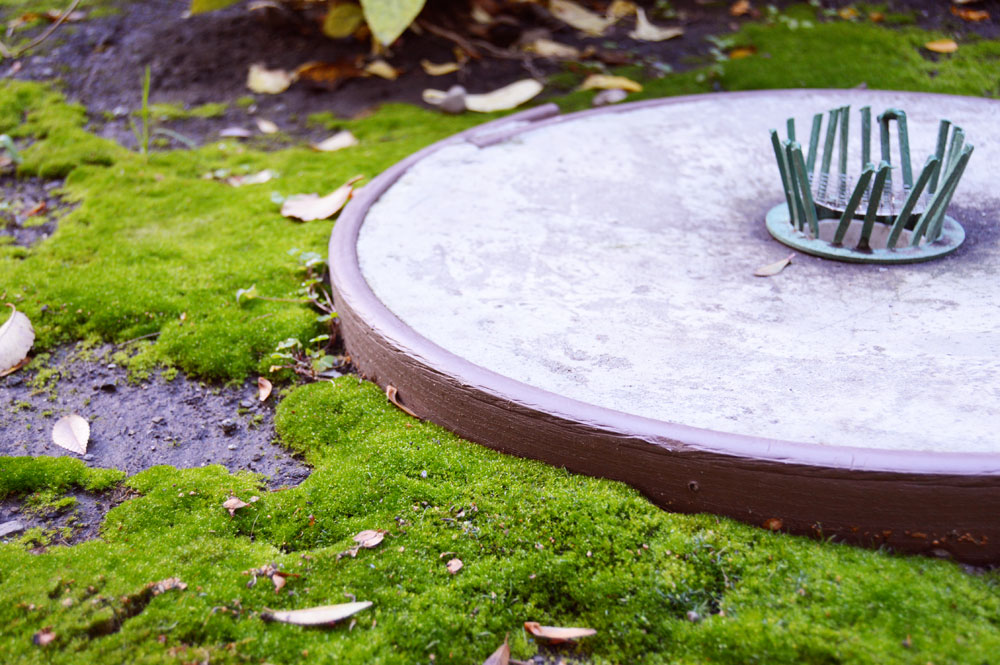 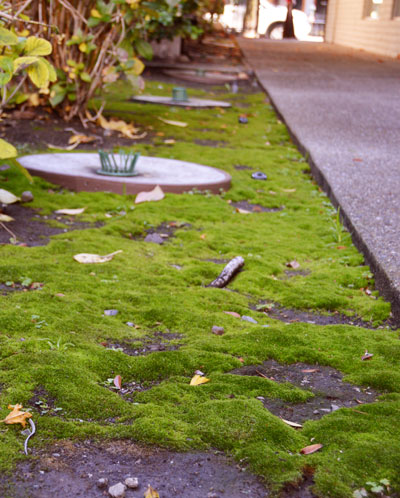 If you love moss plant, forest and waterfalls photos, please look at my accounts on Instagram at @iheartmoss or Facebook at iheartmoss.com. We offer a nature-inspired jewelry shop on this site especially for nature lovers. An antler necklace, for example, helps you meet others who share your love of the outdoors. People wear sports jerseys, college, university, team, city gear as identifiers. Show your love for mother nature. It can help you meet others who share your interest and promotes hiking and time outdoors to others. My name is Karen Nierlich and I’m an artsy photographer in Northern California. Love sharing my moss plant photos with you. 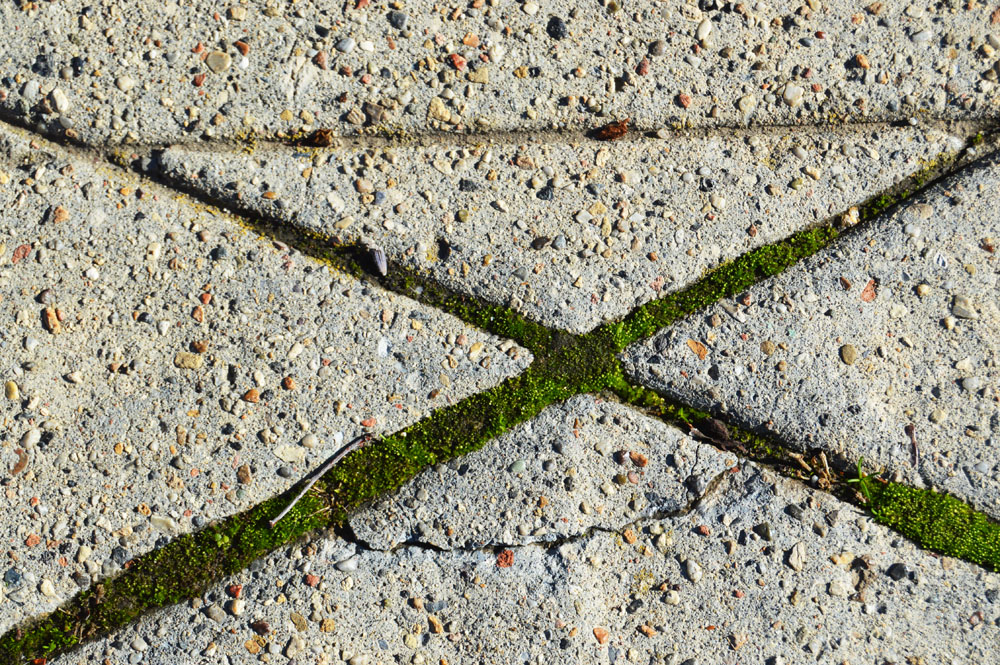 Photos of abandoned spaces are replent with moss. Visit Faerie Magazine online to see beautiful castles, gardens, bridges, and churches. Once the roof is gone, trees, plants and moss take over.

Here’s something a little more unexpected. An abandoned ski resort in Japan where the tables are now rich beds of moss. I wonder exactly where this is and how the photographer arrived at this spot. Were they hiking and decided to enter the resort? Were they searching for abandoned spaces? Did they have to pass through many dark and creepy passageways to get to this room?

Update: I heard from Mossin’ Annie that this is a real photo, not a photoshop version. Some hikers (not botanists or moss lovers) stumbled upon the moss tables in their quest to visit abandoned places. (See Go Green with Moss on Facebook. Mossin’ Annie is the Moss Chief at Mountain Moss in Pisgah Forest, North Carolina.)

Moss and Lichen by photographer Karen Nierlich captures images from around the Bay Area including Berkeley, Albany, Tilden, Muir Woods and the Dipsea Trail. Available from Lulu.com for $19.99. Click on book cover to access reviews and purchase!

I’m not counting any raindrops yet, but the newspaper and meteorologist seem pretty confident we have a big storm arriving tonight and staying through the weekend. I’m keeping a day clear on my calendar so I can visit my mossy Bay Area haunts. Included here are photos I took after the rains in December 2014.

The cuppy things are Pixie Cup Lichen. I’d never even seen this lichen before I started this project to photograph moss. One sees things that were unseen before one really starts to look intently! It a major axiom or life lesson. We determine what we see by how we look and what we look for!

Getting back to the Pixie Cups. This British Wildflower site by Roger Darlington describes them thus: “Shaped like Shreks’ Ears or miniature golf-tees (podetia), albeit somewhat battered and sand-blasted ones. The sprinkling of light-grey-green pixie dust (squamules) between them is part of the lichen.”

I’ve been hiking around all my life and never seen a pixie cup before this year! Let’s say it’s a perk of my moss project.

While moss and lichen favor a lot of the same moist places,  lichen is structurally very different. D-i-f-f-e-r-e-n-t is not understating it. Lichen may be the only symbiotic organism….Like moss and liverwort it’s a non-vascular plant, meaning it doesn’t have a system of cells that carry water, which it why it remains small and close to the ground. It gets water and minerals from its surface.

The amazing, weird and different thing about lichen is that it’s made of algae on the inside and fungus on the outside. The algae have chorolphyll which help it make food for the fungus…I’ve oversimplified what is known about the alga/fungus relationship of fungus. If you want to know more about this unique relationship—consult another source:)

Moss and Lichen is a collection of Moss images by photographer Karen Nierlich including the streets of Berkeley, Albany, Tilden, Muir Woods and the Dipsea Trail. Available from Lulu.com for $19.99. Click on book cover to access reviews and purchase!

I’m feeling the loss of rain here in the Bay Area like many people. January is supposed to be the rainiest month of the year and we have had no rain! With the exception of a couple of cold days of strong wind, we’ve had warm, bright days. I miss our normal weather pattern with cold, wet days perfect for reading and making winter soups in the evenings and weekends. Those are my personal loses, but moreover, I worry for the plants and animals who are searching high and low for water and food to sustain them.

In early December we had a week of stormy days. We were all a buzz exclaiming over it. My friends and I learned a new word, “Pluviophilia” which means love of rain. I knew I liked the rain, but now in it’s absence I know I love it. I don’t want a year of sunny days with no rain. I want some of each in approximately equal parts!

Moss and Lichen is a collection of Moss images by photographer Karen Nierlich from around the Bay Area including the streets of Berkeley, Albany, Tilden, Muir Woods and the Dipsea Trail. Available from Lulu.com for $19.99. Click on book cover to access reviews and purchase!

Got busy with my camera this week the minute the rain cleared because I checked some reports on California weather and learned we have just 2.5 months of winter left. This chartreuse moss photo is actually lichen. It covers a whole fence somewhere along the Arlington. Been by there several times trying to find a way to make this backdrop into an interesting photo. I may be using this image as the book cover. Love it so! But then it’s lichen…so a complication.

My walk took me up Portland Avenue to Colusa and then further up Vicente Ave to one of the “secret” stair paths up there. There are some gardeners there on Vicente who are crazy about succulents. Hats off to you all! I’ve included some of your gems.

West Berkeley fascinates me as a study in contrasts. There are modern homes and small, dilapidated ones. Day laborers wait up and down Hearst Avenue near Truitt & White Lumber for construction or gardening job. At the upscale boutiques and restaurants on 4th Street flocks of people socialize and shop. (Photo: Mossy Gate on Stannage Avenue West Berkeley)

There’s a rustic and an urban vibe in Berkeley. The rustic vibe consists of Mexican-inspired bright colored houses, vegetable gardens and chickens, handmade birdhouses and farmer’s markets produce. The urban vibe comes from the industrial businesses like a steel foundry, the freeway, and BART.

This generous strip of moss lives across from my sister’s home. Again moss is more interesting (in a photo) with a bit of contrast. That’s the job of the hard edged bricks play in counter point to my furry friend.

I found this super bright green neon moss in my neighbor’s front yard. I’ve gone by many a time to check on it and it’s been this color for a few weeks. It’s brightness peaked my curiosity about what kind of moss it is. (There about 8-9,000 kinds of moss worldwide.) In four or more years of taking moss photos, this is the first time I’ve thought about what kind of moss I was looking at.

I’ve done a touch of research and don’t have much idea yet about what kind of moss it is. First I went through the book I have on Mosses, Lichens and Ferns of Northwest North America. I found a west coast moss called Isopterygium elegans that was described as “bright, shiny yellow-green”. However, when I compared the sample to the photo in the book, they looked nothing alike.

I also compared my sample to the very very small # of other moss samples I’ve collected — just 2. Actually, this moss looks just like the moss I’m photographing in cracks in the sidewalk of my Albany, CA neighborhood. Seems likely it’s common to this area and what I’ve liked about the sidewalk moss is how bright even a tiny little strip of it in a crack or crevice it can be after a rain.

Next stop is the botanical garden in Tilden. I want to find out if the mosses I’ve been photographing there are “special specimens.” Are they mosses that have been collected and brought there or did they just happen to grow there? Fine either way, but I want to try to ID them and see if they match or differ from the mosses in my neighborhood.

One more thing — I found this one moss in the book called Bryum argenteum that is small, compact and silver green. It occurs throughout North America and is often found in “cracks of pavements, yards, roofs and building crevices.” Maybe this will be the first moss I learn to ID.