I woke up this morning thinking about how sometimes I like to include cars, sewers, chain link fences and other made things in my photos. I guess I think of it as true to the real status of nature as barely co-existing or at the mercy of our human encroachment.

I took a series of pictures last year at Muir Woods last Spring. I found it kind of ironic and slightly humorous that I discovered a collection of dancing moss trees over a creek by the parking lot at Muir Wood.  Though I hike and walk quite a lot, one of the mossiest sites I found was practically in a parking lot.

Karen Nierlich is the author of www.iheartmoss.com a blog about moss and art, craft & decor. Heading out tomorrow at 6 am to the mountains near Tahoe to commune with my extended family and nature. I’ll have a camera in hand loaned to me by a friend, Francesco. I’m particularly grateful for the camera, as the one I had stopped working when I dropped it. Opps.

You are invited to follow me on Twitter at https://twitter.com/#!/AlmostEvrything. Stayed Tuned for more photos from Muir Woods.

There are innumerable cool facts about moss. 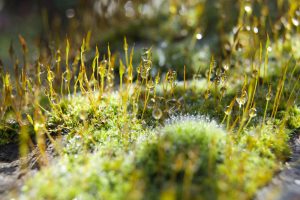 1. Moss was the first plant on earth. Algae adapted to life on earth…evolving into lichen, liverworts and moss.

2. Mosses live all over the world. There are over 10,000 species of moss worldwide.

3. Mosses tend to grow in moist places, but some species are drought tolerant and cold tolerant.

5. Mosses are anchored to earth, rock, trees by rhizoids which look like tiny roots. The rhizoids are a thread like structure but don’t absorb water or nutrients. 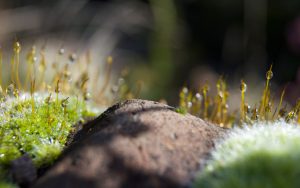 8. Mosses grow in a wider range of light exposures than other plants, from bright to dark.

9. Mosses have been used over the centuries as pillow stuffing, wound dressing and diapers. It is not used as a human food to the best of my knowledge.

10. Mosses collectively provide more carbon offset than all the trees in the world. 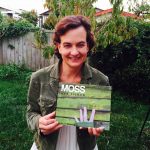 Karen Nierlich is the author of the book Moss and Lichen and takes photos around the San Francisco Bay Area.

She also curates a collection of forest-inspired jewelry and gifts for nature lovers at shop.iheartmoss.com.

The Moss Maiden and her Giant friend reside in the Lost Gardens of Heligan, near Mevagissey in Cornwall. The two sculptures were created by Artist Sue Hill and her brother Pete Hill. In the photos the giant looks alive…the shape of his eye sockets and eye balls are so compelling. His sculpted ear and nose are somewhat exaggerated and humorous and integrate so well with the plants of his hair and skin. The moss maiden I admire for the way she hugs the earth and becomes one with the forest around her.

If you are wondering how the moss maiden was created…the project started with a hallow frame of timber and windbreak netting which was then covered with sticky mud. Mud, sand and cement were mixed together to form her face and hands and then coated with yogurt to encourage the growth of lichen. Her hair is Woodsedge and Montebretia plants while her clothes are ivy.

The Giant’s head was created out of a fallen tree with a huge root ball. Again, mud was plastered onto the tree root to create the face. Finally twigs were scattered through and stuck on the top of the head.

Sue and Pete Hill have created other moss maidens for The Eden Project in Cornwall and the 2006 Chelsea Flower show and other earthwork installations. Today Sue is a core member of Wildworks, an unconventional Cornish theatre group that travels the world to create massive installation/ theater events.

The Lost Gardens of Heligan are an expansive Cornwall, England estate that fell into neglect during WWII. Today its a popular botanical garden. From the mid-18th Century to the beginning of the 20th Century, the Tremayne family created the gardens which are made of several gardens of different designs as was typical of 19th Century estates. Before WWI there were 22 gardeners caring for the gardens, 16 of whom died in the war. In the decades that followed the house was rented out. In the 1990’s the gardens were rediscovered and restored by a member of the extended family and other garden enthusiasts. The local economy was revitalized when the garden restoration project became the subject of a British TV series in 1996.

You can see other mud/moss sculptures at this link including several moss maidens’ created by Sue and Pete Hill.
Learn more about the Lost Gardens of Heligan on Wikipedia.
Short Bio of Sue Hill at The Wildworks.
Moss Maiden Video at “Look Around Cornwall”

Giving credit where credit due. As best I can tell these Moss Maiden and Giant photos are by: Ollie O’Brien, Fat Dad, Walt Jabsco (larger Giant image), and Liz Jones (maiden).